www.riphopkins.com and exhibited in Lyon, at the galerie Le Réverbère from 06.12.2010 till 26.02.2011 with “Another Country” and “Romanian Rip” projects – “An exhibition on two identities – that of the British living in France and that of Romanians in their country recently subject to drastic changes.” – More details here.

“Timisoara is the town from where the Romanian Revolution sparked off in December 1989. Twenty years later, it enters, with its country, in the european community. Two groups live together in this town : the ones from before and the ones from after the 1989 Revolution. Those who were over twenty-five in 1989 had difficulties to adapt to Capitalism. The younger live fully this new system. To show the two faces of this society, I’ve photographed Timisoara’s life machine : industry, commerce, authority, leisure, family. The caption on each photograph indicates the age of the people, some of whom were witnesses of the revolution, witnesses of the truth.”

“Because the true story is still uncertain. In december 1989, following an uprising from the people of Timisoara, the media announce 12,000 people dead, killed by the army and the Securitate, the secret police. There is talk of a genocide. To prove the executions and the tortures of Ceausescu’s regime to the western media, eager to get carried-away, the organizers of the uprising rigged a staging. They dig up from the cemetary and lay out for show nineteen corpses of people dead for several weeks. Journalists from international press photograph this mass grave with a man crying over the corpses of this wife and baby daughter. What they don’t know is that the man is paid to play this part, the woman died from a cirrhosis of the liver and the baby, who is not his child, was a victim of infant sudden death*. In reality, only eighty nine deaths were officially counted in Timisoara and six hundred and eighty nine over the country.”

“Since this spectacular manipulation, Timisoara symbolises doubt concerning images and media. This staged show replaced the real information and fiction has crept into documentary reportages. Even though a photographic document is suspect by nature, we often want to believe in it. The photographer is manipulated by this subject just as much as the subject manipulates him. By inserting myself in each image, I wanted to ask the question of the truth in the photographic image. The fluorescent orange of the shutter release, clearly visible, asserts my intrusion inside the image. I thus sign the making of the document and its origin.” 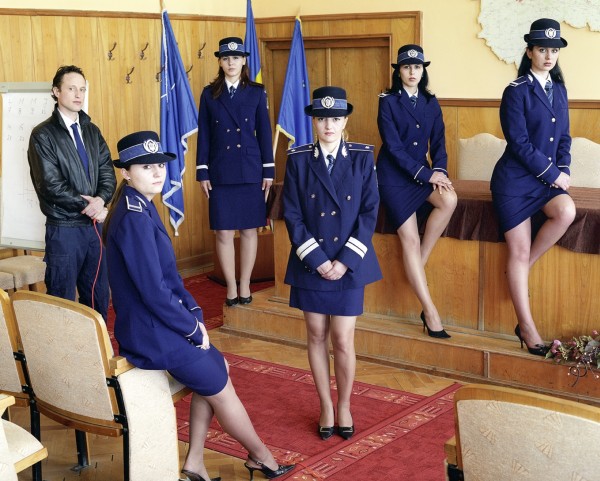 “At the same time, I try to merge into the image. By dressing up and behaving like the people photographed, I strive to erase our representations of nationalities and social backgrounds linked to dress codes. Strangely, no-one considered this approach as being odd and all said they felt more at ease in front of the camera when I was with them. Absent from the captions in which the other names betray their Romanian, Italian, Serbian, Hungarian, German, Austrian or Turkish origins of the people I photographed, I question my position and the imaginary barriers raised by men between them.”
* Robert Maas, Timisoara, Roumanie, december 1989. Source : Daniel Girardin & Christian Pirker, Controverses : une histoire juridique et éthique de la photographie, Actes Sud / Musée de l’Elysée, 2008.

you can find more images from Romanian Rip on the artist’s website; found via Kodak Moment